Foods around the world 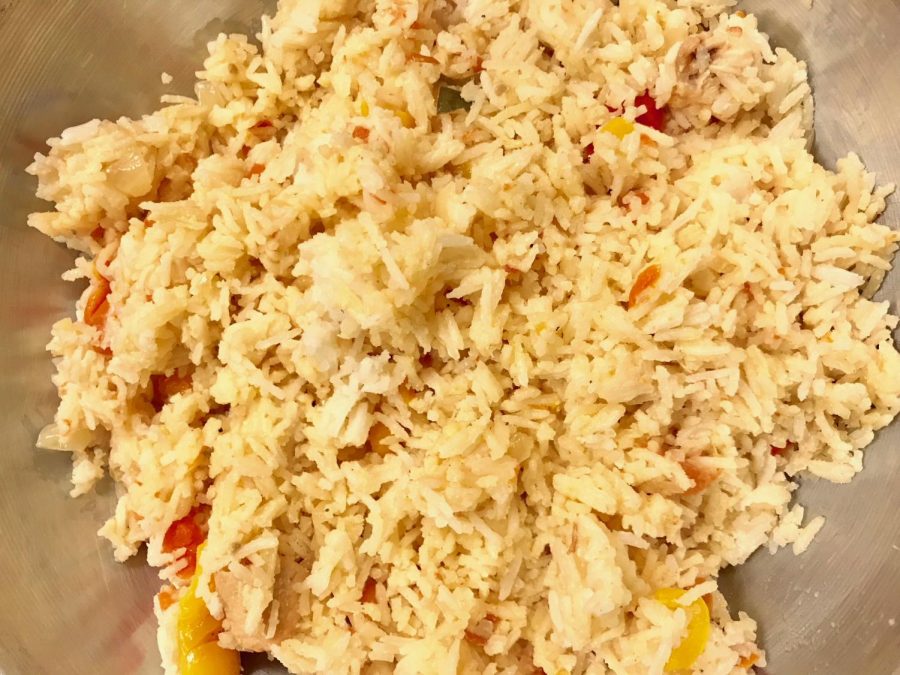 Coming from several parts of the world, coconut rice is a flavorful dish for any occasion. The tomatoes, habaneros, and green peppers add color to the rice while coconut milk brings a tropical twist.

Coconut rice is a dish made in many different ways, originating from cultures in Southeast Asia to the Caribbean. The Nigerian way to cook this dish is to add diced tomatoes, habaneros, and green peppers with a pinch of sea salt into a pot. Coconut milk is added in order to give the rice its coconutty flavor. After the vegetables have simmered, previously boiled rice is added.

Coconut rice can be used as a side dish to a big feast, or a meal in itself. From Zanzibar to Tanzania, coconut is used for things like beverages, breads, meat dishes, and desserts. Often times, in the coconut rice dish, whole pieces of coconut are used to flavor the rice instead of coconut milk. This adds an even more fresh, nutty, and sweet flavor to the dish, which allows it to be more natural. Coconut rice is not a dish that requires a seasonal flavor. It can be served during multiple occasions like Thanksgiving, birthdays, and even funeral services.

Junior Halima Thomas recently made this dish in her cooking club. They decided to use coconut milk as an alternative to fresh coconut. She likes to eat this dish for special occasions, or just when she is hungry for something different. Halima said, “I was first introduced to this dish by my mother because it’s a traditional family dish within the Sierra Leonean community. My aunt was the first person to make this, dish and I totally fell in love with it.” Sometimes her family decides to add chicken for an increased flavor. Halima’s mother is from Sierra Leone and said, “This dish signifies my African Culture because it represents me as an African, mainly because it’s a dish that has been passed down from generation to generation.” The coconut rice dish connects Halima to her heritage and she says it is a simple and fun dish to make.

Although there does not seem to be any African restaurants in Raleigh selling coconut rice, it does not mean there is not a way to eat it. Get in the kitchen with a friend or family member and see what yummy twist you can add to this dish!