From Texas to Germany to North Carolina 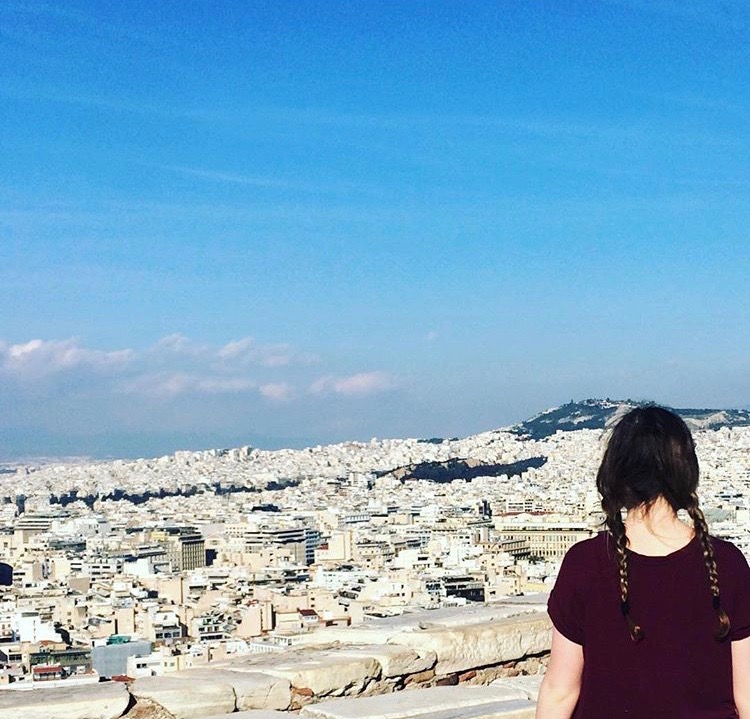 Looking out onto the city of Athens, Greece, Caroline Cameron is a world traveler. She recently joined us at Millbrook from Munich, Germany.

Twenty-three countries in three years. How many people can say they have been to 23 countries? Caroline Cameron can.

Caroline Cameron lived in Dallas, Texas, for twelve years until her whole family picked up and moved to Munich, Bavaria, Germany, for her dad’s work. She lived in Germany for the duration of middle school. Caroline attended Munich International School where there were many other kids who had moved from America and other countries for similar reasons.

At her international school she took English, German, and French. During her time in Germany, she got very well versed in the German language. She also highlighted the superb school lunches served at her school. Lunch options included a sandwich bar with different sandwiches and “hot lunch,” which consisted of pastas.

Caroline describes the transition as relatively hard, considering they did not speak German, and the culture was very different. In Germany, just about everything is closed on Sundays which was an awkward adjustment. In addition, citizens also were expected to remain quiet on Sundays as Europe is very Catholic. There were also no malls in Germany, which you can imagine is troubling for a teenage girl, but instead individual shops. She and her friends would take a train and go into the city for the day to go shopping.

One of her favorite memories from her time in Germany was attending the annual folk festival, Oktoberfest, which is held in Munich. Oktoberfest begins in late September and lasts for 16 days. The festival is comparable to state fairs in America. She was attracted to the good food at the festival such as chocolate covered strawberries and soft pretzels. Attendees dress in dirndls and drink beer for two days straight, if you are 14 of course, which is the legal drinking age.

While living in Germany, traveling became a big part of her family’s life. They have been to 23 countries including Thailand, Italy, Denmark, Portugal, France, Greece, Egypt, Belgium, and Austria, her favorite being Greece. They also ventured back to Dallas to spend their summers. “Germany is centrally located in Europe, so it would be about a two hour drive to Italy, so we would just go down all the time. We went everywhere,” Caroline explained her family’s ease with traveling.

Caroline and her family moved to North Carolina in July, and she started her freshman year at Millbrook. She has since become very fond of NC. Caroline is pleased with the much more laid back atmosphere in America. It is much easier for her because she is able to communicate in her native language, English. A big societal difference she noticed in Germany was the lack of hospitality. Customer service especially, but people in general were not as outgoing and willing to help. She stated, “In Germany people aren’t really willing to help you and figure out what you’re saying. That’s just not who they are. They’re not really willing to give in and understand what your saying. And when we moved there, we had no German skills.” Caroline also likes the food here better. The food in Germany consists mainly of carbohydrates; potatoes and bread are customary. “There’s a lot of meat covered in fried things. It’s disgusting,” Caroline stated. Consequently, her family cooked at home a lot.

Caroline Cameron has seen so much of the world already in her lifetime. We are blessed to have her amongst the student body here at Millbrook, and there is much to learn from her and other students of various cultures.