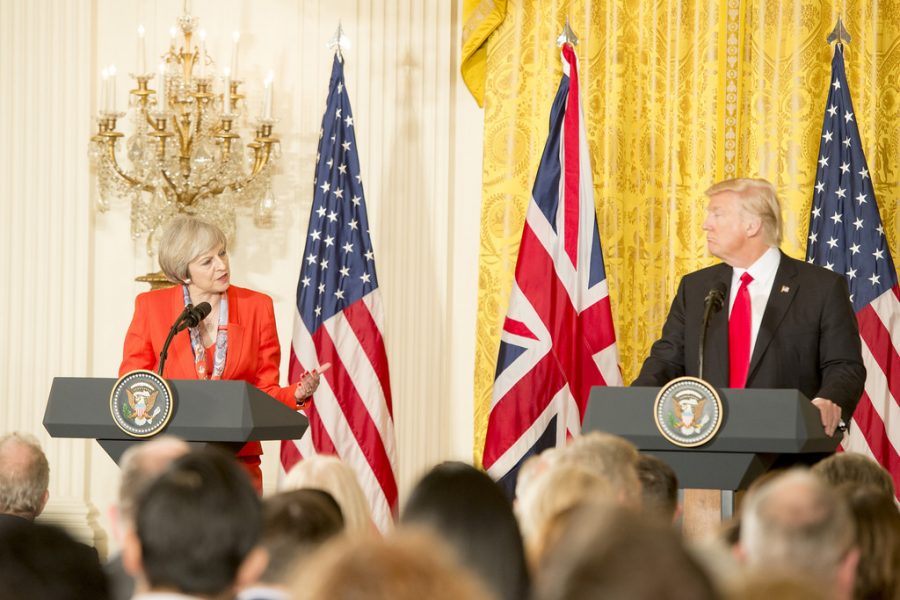 Holding a press conference with UK Prime Minister Theresa May, President Trump discusses the UK leaving the European Union and the United States involvement. This was only one of many press conferences held during 2018 to discuss major events.

2018 is almost over, and it is hard to remember everything that has happened this year in politics. With new policies, changes of Trump administration members, and deals made with other countries, this year has been full of twists and turns. President Trump finished his second year in office with thirty-seven 37 executive orders in this year alone, the U.S. faced two government shutdowns, the Democratic Party gained control of the House during the midterms, and two new Supreme Court Justices were approved. There has also been a lot of debate over gun control, immigration, and abortions. The relationship between President Trump and the media has turned hostile due to some of this debate. An anonymous op-ed, or opinion editorial, was published on September 5 claiming a resistance was taking place in the Trump administration, which put many of his supporters on edge.

An event that also put people on edge was the ruling that was determined on June 4 in favor of a Colorado baker that denied service to a gay couple wanting a wedding cake. The reasoning of this ruling was that the baker has the first amendment right to deny service to anyone because of religious freedom. Many protested against this decision because it allowed discrimination. A similar divide in beliefs was shown during the confirmation of Supreme Court Judge Brett Kavanaugh. Both rulings caused major uproar by the public and separated people because of their views on the ruling. Sophomore Ryan Gibson said, “I think the biggest political event of 2018 is the growing divide between American citizens based off of political stances and how it has impacted the political landscape today.”

An additional major event from the Trump administration is the immigration policy and how it is affecting “dreamers”. Dreamers are people who immigrated to the U.S. as children but never became citizens. DACA, also known as Deferred Action for Children Arrivals, helps protect certain dreamers from deportation. An additional event involving immigration is the caravan containing Central Americans that wish to immigrate to the U.S. Trump ordered hundreds of troops to go to the border where “non-lethal force,” tear gas, was used.

Finally, the midterms caused a major shift in the approval of new legislation. In the House of Representatives, 23 seats switched from the Republican to the Democratic Party leading to a Democratic majority. However, not much changed in the Senate other than the Republican Party continuing their majority by obtaining one more seat. The majority in Congress helps because the party with the majority gets major leadership positions, like Speaker of the House and President of the Senate. The midterms also made history by bringing in more diversity to Americans in power. The U.S. attained its first gay governors, its first Muslim women in Congress, its first Native Women in Congress, and its first female governor of the U.S. territory Guam, as well as many others. All of these “firsts” help to make the people in control more relatable to their constituents.