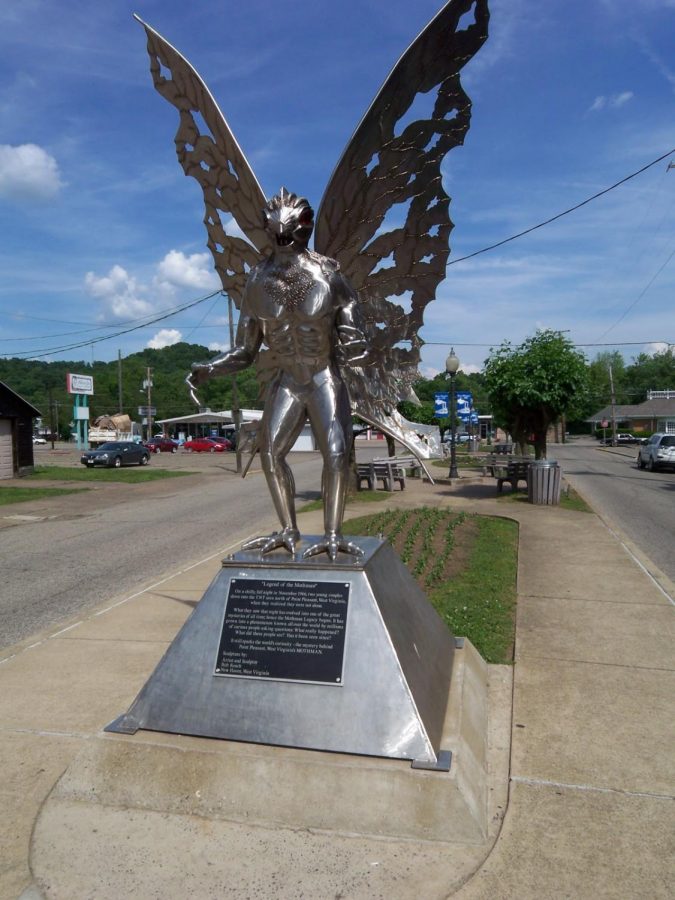 Towering over a seemingly normal sidewalk in Point Pleasant, West Virginia, this statue of the Mothman warns people of his possible existence in our world. This shows the insane amount of traction and impact this mammoth moth has had since its first sighting in 1966.

Greetings, and welcome to the Cryptid Corner: your complete guide to the strange and unknown where the truth unravels before your very eyes.

In the state of West Virginia lives a tale that raises hairs and rattles bones; this is the legend of the Mothman. As the year of 1966 drew to a close, five grave workers made a sighting of the ages. An unexplainable large winged creature was spotted launching off the ground while they were preparing a grave. The workers all agreed that this was no bird but some humanoid monstrosity. Cut to November 15, 1966, three days after this strange incident comes a different account of this insectoid individual that fills the mind with fear and disbelief. This time taking place in an abandoned facility known as the West Virginia Ordnance Works that dates back to World War II. this location was coined simply as the TNT Area to locals. The chill of winter was setting in on this cool autumn night. Roger and Linda Scarberry, accompanied by Steve and Marry Mallette, were having a midnight drive, when all of a sudden Linda saw two ominous glowing red eyes piercing through the opake darkness of the night by the North Power Plant. Roger stopped the car to inspect this strange spectacle, only to realize these eyes belonged to a behemoth of a man with massive wings folded on its back.

Fear jolted the couples as the mammoth moth monstrosity unleashed its terrible wings and bounded after them. They raced down Route 62 and were well surpassing 100 mph, but this expeditious enormity was keeping close track of the four. They managed to arrive in Point Pleasant City. shaken and confused they attempted to grasp something which they could not comprehend. They finally came to the conclusion that it was a strange bird and decided to go face their fears. They headed back to the old TNT Area and soon realized that there was no bird; as if it were waiting for them, the creature was still by Route 62. The creature saw the vehicle and with an enormous amount of power hurled itself into the night sky, effectively vanishing before the four’s very eyes.

They raced back to town, and this time reported it to the Mason county courthouse. Two hours later a City police search was in order; however, the case went cold. The next day the local paper published an article about this whole conundrum, and this was the beginning of a thirteen-month long period in which over one hundred reports of the man-sized moth would come to the public’s eye. and so the tale of the Mothman began. The Mothman has now become a massive icon and is one of the most well-known Cryptids to this day. Senior Juan Piña had this to say about this menacing moth and its impact: “I think the Mothman in something that science can’t really explain. His lore is pretty interesting because there really isn’t one. He simply just appeared out of nowhere, but with his surprise entrance, he brought bad luck. Some people even think he’s a bringer of chaos. Personally, I think he might be out there just lurking in the shadows waiting to surprise us all again.” So beware reader; this is only one beast that scourers the land. Many more hide in plain sight. But do not fret, for I will guide you through the strange happenings of this world. Until we meet again, stay alert and stay aware for that nothing may be something.