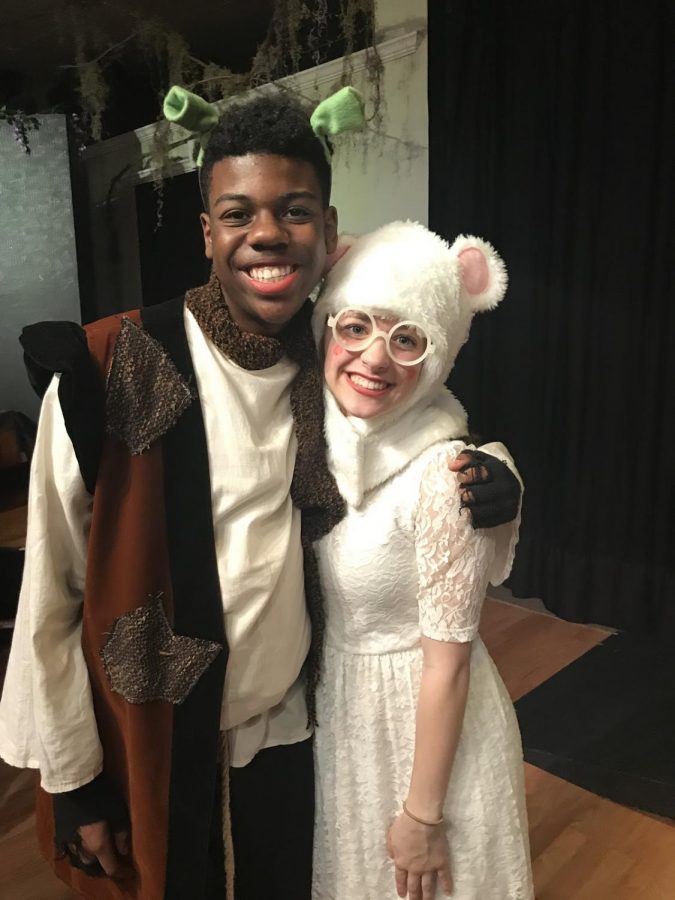 Standing next to his former cast member, Christian smiles after a successful performance of Shrek. Theatre and the arts is something that Christian is very passionate about in and out of school.

Freshman Christian Bartney is involved in many aspects of the school, as he is the President of the Class of 2022, a member of Key and Tap club, and a part of Millbrook’s theatre and choir. He also played Mr. Bucket in the school play of Willy Wonka! Humanities teacher, Mr. Cope, said, “I think the best quality Christian has is his positive attitude. Not only do you hear it in the words he uses to talk about life, but you see it in his smile too. He has a gigantic smile that just makes you want to smile back and feel more positive yourself. He’s the type of student you want in class because on the tough days he helps everyone struggle through, and on the easy days he finds a way to kick up the fun,” when tasked to describe Christian.

Christian started his first year taking AP World History, which is a rigorous course to take as a freshman. With many teachers having an impact on him, Christian stated that “Cope has pushed me in to knowledge of World History. I thought I knew everything, but Cope showed me that there is more to learn. Other teachers that have had an impact on me include Mr. Kotzian for sure. I feel like he has pushed me hard in my acting, and I have just started to get to know him. I can not wait to see how he pushes me to be a better actor in these next 3 years. Mr. Adams has also helped me with my voice and helped me look at the future in a different perspective.” Christian was also a part of the Middle School Outreach program, where he was the only freshman chosen to travel to three different middle schools to tell the middle schoolers about his transition from middle to high school.

Christian, as well as taking his studies very seriously, cares a lot about the arts. He is involved in dance and theatre outside of school. In fact, Christian played Shrek, in Shrek: The Musical at Durant Road Musical Theatre. During his performance in March, Christian had lost his voice and went into it hoping for the best. Although he played Shrek, he would describe himself as more of a donkey. Christian was worried he would not be able to portray Shrek in the right way. Donkey has the talkative, hyperactive personality while Shrek is a more loner, cranky character. He finished it spectacularly, though, and did not even mess up! In the summer, Christian volunteers with theatre camps and spends a lot of his time doing other related activities. In the future, he wants to go to Julliard in New York, which is at the Lincoln Center for the Performing Arts, to major in Musical Theatre and minor in Music.

Christian is a smart, talented, and confident student who will never fail to put a smile on your face. Freshman Lily Salyer described Christian as “a very driven person in everything he does. He knows what he wants to pursue and he is focused on everything he does, including musical theatre, which he is really good at.” All of this and more shows that Christian truly is a spectacular student.