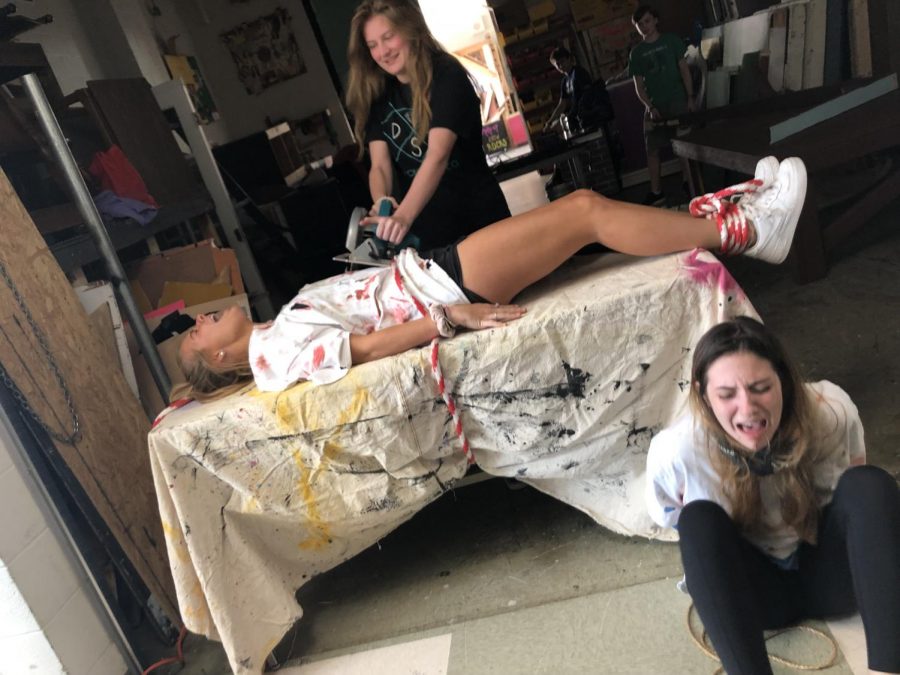 Rehearsing for the big night, seniors Morgan Hardy, Ashlyn Connel, and Avery Glenn practice their scene based off of the movie Saw. To see this fright and more, come to Eklektikos tonight at 7 PM!

Millbrook has many different annual traditions that get students excited every year. One show unlike any other is Eklektikos. Eklektikos has been a yearly performance in the theatre department for six years. It started as a production organized by the advanced theatre classes. In the past three years, the event has taken a drastically different direction. The Creative Arts Department turned this tradition into a haunted house that many diverse groups of students get involved in. Eklektikos 2019 will take place on Tuesday, October 8, and will be the best one to date because of its two years’ worth of planning due to last year’s cancellation. To make this event possible, students from the Theatre, Dance, Music, Film, and Art departments will get together to create an eerie haunted house.

Eklektikos will be showcasing different scary stories from around the world and incorporate myths and legends from different cultures, as well as American urban legends. Guests will be led in small groups throughout the haunted house by a student tour guide who will be portraying a character. The tour will be held in the auditorium and throughout the arts hallway. The advanced and IB theatre classes will be performing scenes to reenact the creepy stories. The technical theatre classes built sets and will be controlling the lighting and sound effects to bring the stories to life. Some of the scenes will include portrayals of Vikings, scarecrows, and many more surprises you have to see in person. The main attraction of the event will be the Russian Sleep Experiment. The myth claims that in the 1940s Russian scientists performed a series of experiments on prisoners to test the effects of not sleeping for a long period of time. They supposedly used gas to keep them awake, and the test subjects went insane over time. To see what happened during these experiments, come to the haunted house!

The event will also showcase scary stories through dance and music. The Millbrook Dance Company started preparing early in the school year for the haunted house. Dancers will represent a scary theme that will be sure to leave the audience surprised. The Millbrook Madrigals contributed to the haunted house by singing a scary song to build up the nerves in the audience. Millbrook band and orchestra are also involved in the event by playing music in the cafeteria when guests arrive. Art students will be helping with the event by doing special effects makeup on the actors, as well as having a makeup booth in the cafeteria to raise money for the Art Department. This event is one of the rare times the majority of the Creative Arts Department collaborates. Senior Molly Foster commented, “It is awesome having most of the Creative Arts Departments put on one epic show because Millbrook does not do that any other time during the year.”

Eklektikos will be put on tonight and the doors will open at 6 PM. The tours will start closer to 7 PM to allow visitors to have time to participate in all the activities in the cafeteria. Do not miss this event to see all of the all of Art Departments come together for one grand show that will be sure to get students, staff, and faculty in the spooky spirit!