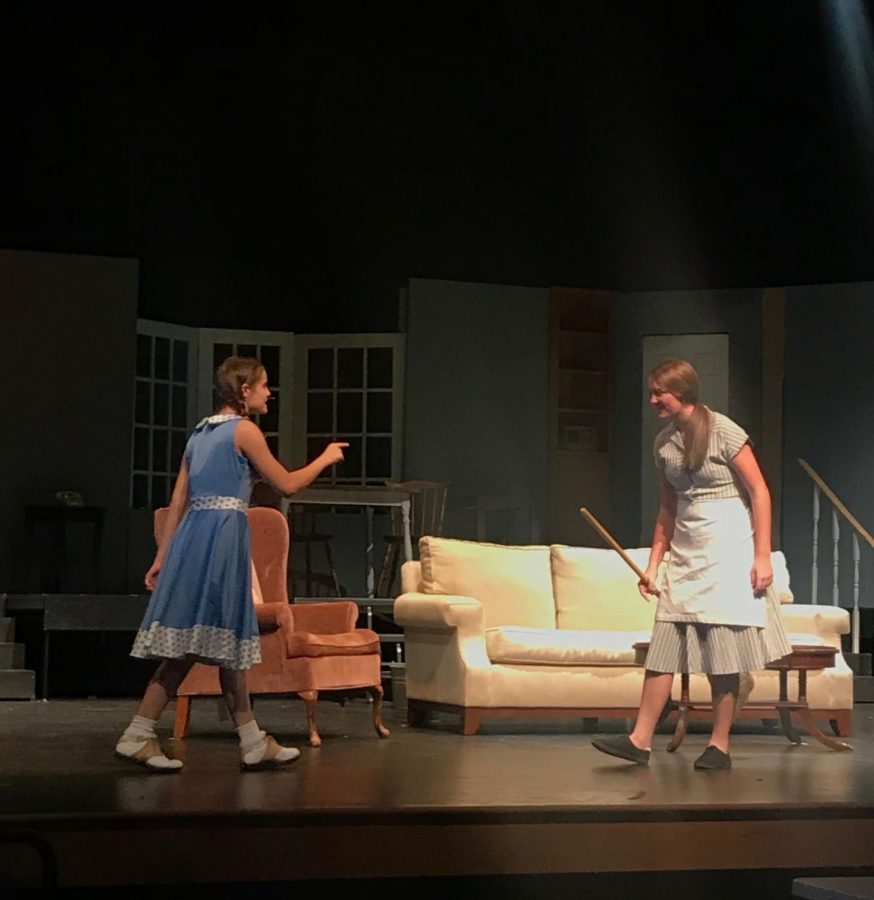 Rehearsing for the fall play, freshman Lily Kindsvatter takes on her role as Rhoda Penmark. Lily gained a lead role in Bad Seed despite learning how to act just this year.

You may have seen her in the fall play, Bad Seed, acting onstage as the only freshman. Lily Kindsvatter started her year by joining Millbrook’s theater program with a lead in play. The program has allowed her to gain the newfound acting skills she showcased in her performance. This ominous character is a killer child that does not have any remorse for her crimes; playing her kicked off Lily’s Millbrook career. Lily started acting this year in her Theater I class without any previous experience. However, she has big goals in her acting career. According to Lily, her dream role in a performance would be “Belle in a production of Beauty and the Beast because of her kindness, compassion, and ability to look past appearances. Or maybe a Hallmark movie, as cheesy as it sounds, because my mom and I have this tradition of binging them during the holidays.” Both of these roles are cheery alternatives to Rhoda Penmark. Her favorite musicals are also bubbly classics; Annie and Mary Poppins are on the top of her list because of their moving storylines and messages.

Although spending so much time in the theater has given her little time to pursue other interests, Lily is grateful for it because of the bonds she has made. The theater program has given her the chance to meet new people and make friends in all grade levels. Lily was nervous about starting the school year and her transition from middle school, but she is satisfied overall. On her freshman experience so far, she said, “As a freshman, people at Millbrook are really welcoming! Before school started, I was really worried about making friends, but upperclassmen don’t actually shove us into lockers, so that’s good. I guess the movies were wrong!”

In her free time, Lily loves to improve her dance technique and skills. Dance is something she really enjoys, and she would like to try out for Millbrook’s dance team next year. She also likes supporting her friends in their crafts. Whether that be going to dance performances, plays, or gymnastics meets, you can easily find her there cheering them on. Lily also enjoys watching Marvel movies, and her favorite actor is Robert Downey, Jr. His acting skills while playing Iron Man are impressive and something she admires.

Being in the theater program has given Lily a quick way to get involved at Millbrook and make new connections. Her career here has only just begun, and we can not wait to see where she goes next!