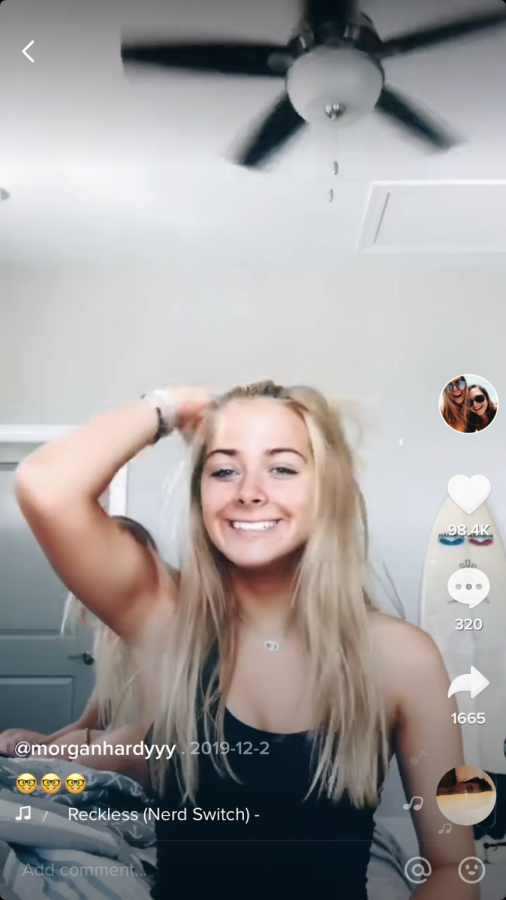 Filming a Tik Tok, senior Morgan Hardy poses for the camera in hopes for her followers to enjoy her content. Morgan may be, among thousands of others, whose information may be at risk.

In the past couple of years, Tik Tok has exploded with popularity as the short videos capture the attention of over one billion users. The short minute-long or less videos contain goofy and bizarre content, like dance videos, memes, inside jokes, and viral videos. Senior Morgan Hardy, who is Tik Tok famous, said that she enjoys making Tik Toks because “they are fun to make, and I make money from them also!” However, many concerns rise as Tik Tok takes over most social media apps, including the subconscious addiction of watching them for hours, making them, and also the fact that the company is based in China. Tik Tok being based in China has users and politicians concerned. Keep reading to find out the threat that China has on worldwide users through Tik Tok.

Although Tik Tok will keep you laughing and entertained, it has faced fines and concerns based on restrictive and controversial content. Recently the company was fined by the Federal Trade Commission under child data privacy laws. Along with those, Tik Tok now faces national security threats because of its ties to China. In addition to the United States government security review, this suspicion continues to grow as a lawsuit was conducted by a college student who said that her data was downloaded to two Chinese servers. The reason that Tik Tok being tied to China is a huge concern is that through the app they are able to transfer your personal data onto their servers; therefore, your personal information and data are illegally being harvested secretly by the Chinese government.

Now, how did this all begin you wonder? The investigation began when The Guardian published their findings on the matter which revealed leaked documents containing evidence that Tik Tok censored videos ruled sensitive China’s Communist Party. At this point, Senator Marco Rubio called for a formal investigation as to why Tik Tok and other Chinese-owned apps continue to block and restrict content on topics that the Chinese government and Communist Party find sensitive. Then it was discovered that their actions could possibly lead to long term issues among our Allies as users are no longer allowed to speak and create content on open discussion topics.

When Chinese servers download your data they can do many things with it. For example, they can collect your data and use it for their advantage. The Communist Party will collect data overseas and use it to help with their security. This means that they can use your information for propaganda along with using you as a public sentiment to get responses. In the grand scheme of things, Tik Tok being based in China allows its government to control users and accounts, collect personal data illegally, and have control over social media in a global context, and at this point, they are capable of anything.