Importance of the U.S. census 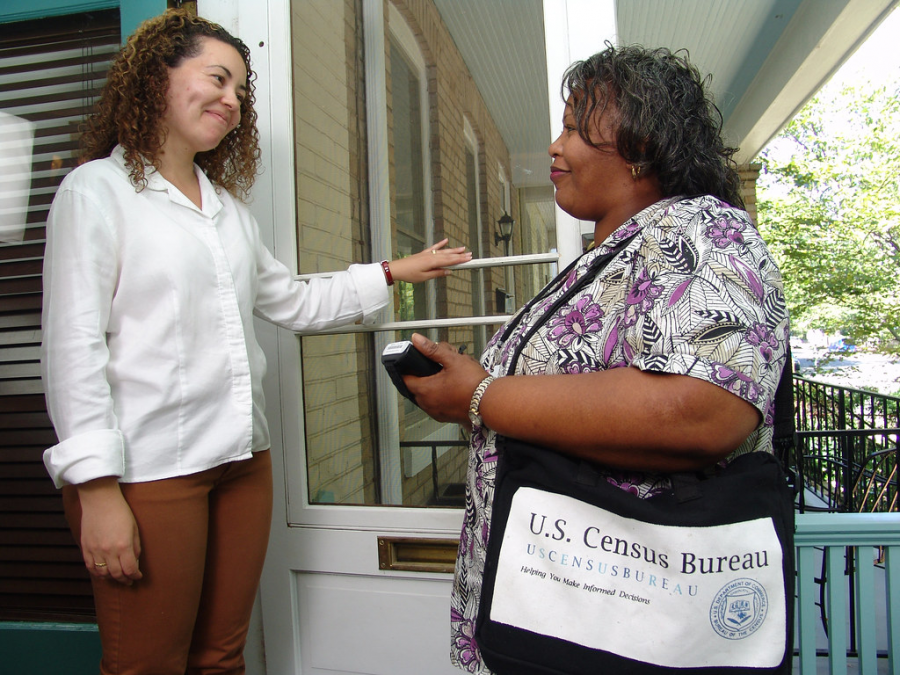 Taking responses from a woman on her front porch, this Census worker is tasked with getting accurate data about population size and demographics within each household. The survey is used to allocate electoral votes and funding for goods in public use, such as healthcare, education and public transportation.

As families throughout our community have socially isolated themselves, an ever-important letter is being mailed out to every American household. That is the U.S. census, a short series of questions asked in order to account for everyone living in the country and gather critical data used in our elections and policy decisions. Electoral college votes and the number of House members allotted for each state is determined every ten years based on survey results. Article 2, Section 1 of the Constitution established this practice, and it has been done every subsequent decade since. The survey also offers valuable data used by business owners, teachers, and many others to provide day-to-day programs, goods, and community support. Billions of dollars in government grants go to hospitals, fire departments, colleges, highways, and other services based on census data every year. For example, the $2 trillion dollar coronavirus aid bill that was recently passed relied on this statistical information to allocate resources on a per person basis. There are seven questions on this year’s census that ask questions about “Person 1” of the household and then extend to other family members or guests. Pets are not meant to be counted in this survey, but they are sometimes accidentally included by their owners.
Due to fears about census takers’ ability to collect information safely, the U.S. census bureau’s final count for 2020 received an extended delay this week. The pandemic has also forced millions of college students to leave their university towns and finish their semester at home. This could result in a lack of funding for college towns like Greenville, Boone, and Chapel Hill, where a high percentage of students do not originally reside there. There have already been problems with misrepresentation of certain areas in past census counts. It is estimated that there was an over-count of 36,000 people in the 2010 census but certain groups, such as young children and minority populations, are more likely to be left out. This includes a five percent under-count for both children ages 0-4 and Native Americans on reservations, and that was without COVID-19 to worry about. The bureau is encouraging people to respond online this year to help solve this problem. Each household will be provided with a Census ID, found on the invitation letter, which they enter on the website when responding. Census Bureau workers will not begin canvassing neighborhoods and non-responding households until mid-May, but there is still uncertainty regarding the pandemic timeline.
So why should you care about being represented? Well, most of every dollar paid to support our infrastructure, fund local libraries, and pay for our public health needs comes as a result of this data. To make sure Triangle residents get their fair share of federal taxes and aid sent back to our community, we must do everything possible to make sure no one is left uncounted.