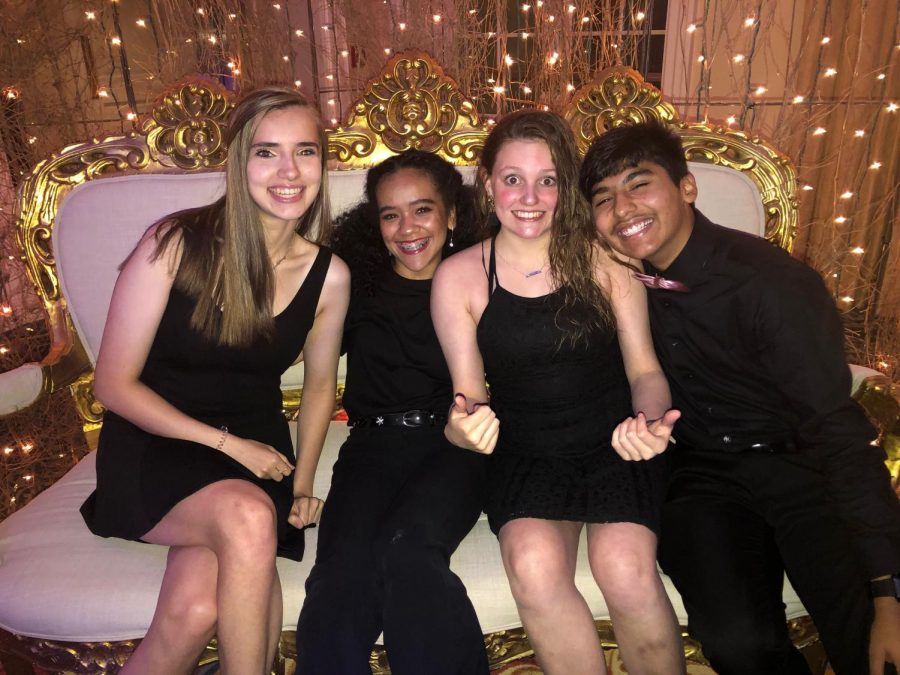 Getting in close for a picture, Xavier Amaro (far right) smiles with his friends while helping out at prom. Helping out at prom is another feature of being a part of class council, which is one of the many clubs Xavier is involved in.

“Xavier’s a great friend. He’s one of the first people that I made friends with after moving to Millbrook. He’s a person who wants to make the world a better place,” said junior Thomas Brinkerhoff. Determined, light-hearted, and understanding are all words that can describe Xavier. It is hard to stay positive in our world, but Xavier always manages to do so. Being a part of the Speech and Debate Team, Junior Class Council, National Achievers Society (NAS), Model UN, English Honor Society, Math Honor Society, the IB Student Executive Board, and Millbrook’s Gay-Straight Alliance takes up a lot of Xavier’s time, but it will not stop him from having a great junior year. With his class ranking being #1 for the class of 2021, Xavier is nothing short of a spectacular student.

Xavier’s favorite activity that he is a part of is the National Achievers Society. NAS is an organization that recognizes students of color for their academic accomplishments. Xavier was inducted into the club mid-sophomore year and has been a member ever since. He likes that there is a community that this society comes with. “I love being able to talk to people who I share similar experiences with. I’ve made many long-lasting friendships through NAS,” he said. Members of this society go on an annual field trip, and last year they took a trip to Atlanta, Georgia. They got to visit many historical monuments and learn about the black liberation movement. Xavier is looking to spend his senior year continuing his journey in this society.

Xavier’s voice is not solely heard within the walls of Millbrook High School. Outside of Millbrook, Xavier helped lead the 2019 Raleigh Youth Summit. The Youth Summit allows for teenagers throughout Raleigh to interact directly with the City of Raleigh government, potential employers, colleges, and volunteer organizations. Xavier was a Youth Ambassador which meant he had the opportunity to give personal feedback and a teen’s perspective that impacts the decision-making processes that go on in the City of Raleigh.

Even with so many clubs and extracurriculars, Xavier has maintained a job. He currently works at Dick’s Sporting Goods as a cashier. He rings out customers and provides excellent customer service. He even earned recognition in the district newsletter for his hard work. Racking up hours, he spends 20-25 hours a week at his job, which can be hard with managing so many leadership responsibilities, but he handles them with much ease. Throughout summers, Xavier has worked at the Raleigh Police Department in youth and family services as an administrative assistant. During this job, he would help organize papers, maintain databases, and help out around the office.

Xavier is very interested in politics and solving world problems. Model UN is a club that meets every Thursday where members act as delegates for the United Nations and participate in conferences as representatives of a certain country. Members during these conferences advocate for their specific interests as countries. Xavier got into Model UN because he loves advocating for others and debating with people, especially on a global scale.

Xavier is a student that everyone should strive to be like. Xavier continues to impress his classmates and teachers every single day. While maintaining amazing grades, he still has great relationships with everyone he talks to. It is so hard as a teen to go against what everyone else is doing, but Xavier has accepted that challenge and has thrived. After high school, Xavier wants to attend a law school to study immigration law and become an attorney.  Xavier is a perfect example of a spectacular student.