Sport of the Month Men’s Soccer 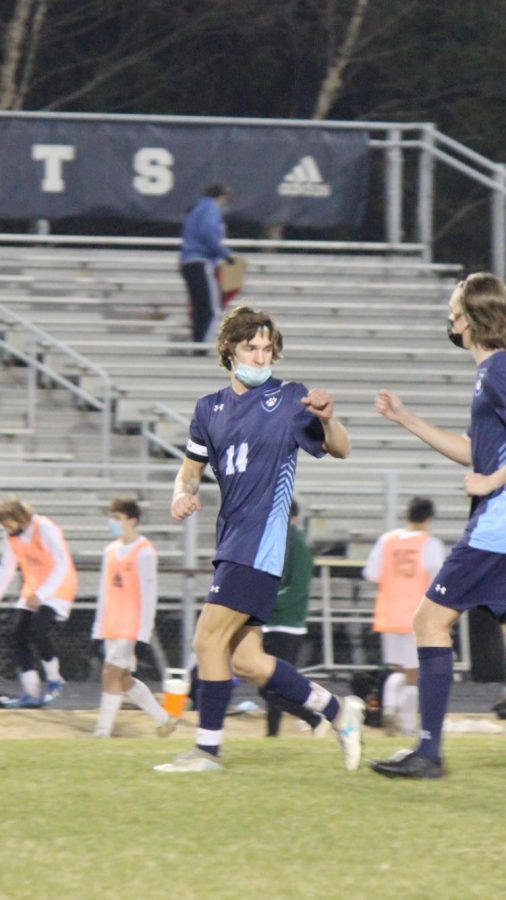 Provided by Will Jurney

Running back after a goal was scored, in their first game, Will Jurney fist-bumped fellow senior Callum Monteith. This goal scored here would not be enough to win against Enloe, but is the only loss the boys have had thus far.

The Millbrook Men’s Soccer team normally plays in the fall, but this season looks a little different this year. The boys will be a little chillier compared to seasons’ past, with games running January through March, instead of August through November. However, the men’s soccer team is just glad to have a season in the reality that is 2021.  This season is important because some thought that it might not happen, so the seniors are thankful for the opportunity to play as a Wildcat one more time. In every game the boys have shown how excited and ready they are, playing until the last whistle and never giving up.

This season has not been easy with it being moved because of COVID combined with the challenges that every season brings. Millbrook senior Will Jurney and captain of the team said, “For the season so far, we had a slow start and are still trying to figure out the formation that works best for us, but it is looking good for the rest of the season and I have high hopes.” This team shows that they can handle flexibility and are able to change to find the best formation to help them succeed. The change has really helped center midfielders like Kevin Martinez, a senior, who has really begun to have success and able to score. He is the must watch player for the other teams because if he is left open near the goal, he will take the opportunity and put in the net.  Hopefully, they have found what best fits their roster and as they embark on the rest of their season prepare for whatever comes their way. Will also said that his favorite part about this team is “the game days with the boys.” This shows the togetherness and desire to help teammates succeed that makes this team great. That is what makes a team a team and why there is a lot of excitement around the soccer program this year.

Through all the trials and tribulations, the Wildcats found that they needed to stick together and become stronger. No matter what, they have stayed united and have done whatever it takes to play this season and will now try as hard as they can to be successful. And that is what a team is all about, being able to make changes for the better and coming together as a team. So for now and the rest of the season, GO WILDCATS!