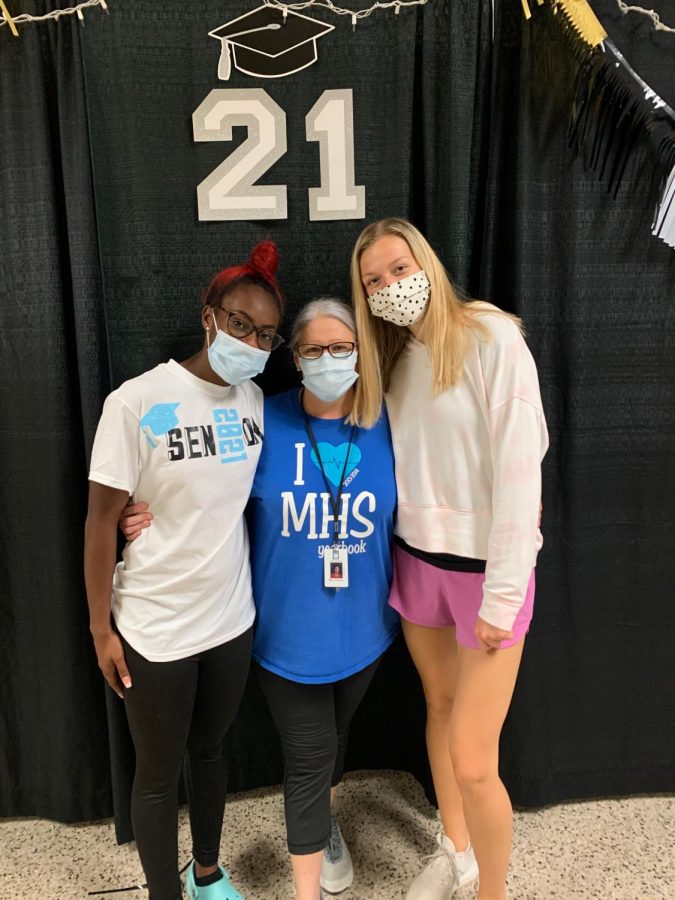 Just like the shirt says, Mrs. Putnam really does love Millbrook, and Millbrook loves her right back. Pictured here with two of her yearbook editors, it is hard to believe that this was one of the last MHS events that the beloved Mrs. Putnam will attend as a teacher before she retires.

It is not every day that a teacher as beloved and tenured as Mrs. Putnam “graduates” from the school they have called home for the past few decades. Yet, the time has come after thirty-four years of giving her all to Millbrook every single day to retire. Mrs. Putnam has done a tremendous amount of work in her time here; serving as the newspaper and yearbook advisor since the 1999-2000 school year, the head of Millbrook’s Service Club, and as an English teacher and English department chair for the majority of her years at Millbrook. She has truly touched many lives, and her impact will not soon be forgotten by the students and teachers who have had the honor of working with Mrs. Putnam over the years.

Senior and two-year Cat Talk staff member John Robbins does not “remember a day on newspaper staff where I did not look forward to class. Mrs. Putnam always made our time in the classroom worthwhile with enough crazy stories and jokes to last a lifetime.” First-year Cat Talk staff reporter Lauren Jones echoed John’s sentiment: “Mrs. Putnam always had a way of making you laugh in the middle of class at something that was never related to the conversation, and the laughter would crack us up even more.” Mrs. Putnam has taught and left a positive influence on countless Wildcats throughout her time at Millbrook, but it is worth mentioning that yearbook and newspaper staffers were almost always who Mrs. Putnam considered her “babies.”

The love that Putnam’s students have for her, and her for them, is evident, as the first thing you will hear to describe her classroom is that it is a “family-like atmosphere” that “allows students to feel at home,” as said by staff member Zoe Werner. Berkeley Sumner explained, “Mrs. Putnam was more than just a teacher to her students, she was seen as a mother.” For Cat Talk Co Editor-in-Chief Maggie Cargile: “[Mrs.Putnam] inspired me as a student and a writer, and I always looked forward to her class each day. Of all the teachers I had at Millbrook, Mrs. Putnam was hands down my favorite.” Jessica Clark, a three-year member of the yearbook staff, credits Mrs. Putnam for allowing her “to find a love in journalism, something I never thought I would have an interest in.” Haley Yopp is this year’s yearbook Editor, and another three-year student who has clearly been impacted by Putnam: “Mrs. Putnam is a person many students and our school will never forget. Her passion and love for her students is what makes her a great teacher. She has taught me so much and has made me a better student and person.

Not only are students made better by Mrs. Putnam, her co-workers are too. English teacher Ms. Smith expressed “Mrs. Putnam is a true legacy at Millbrook who has devoted herself to the students and the staff. She works tirelessly to ensure everything runs smoothly and has been at the helm for many successful yearbook productions. Personally, she has been both a mentor and a friend setting the bar for excellence high. You will be greatly missed, but we hope that you enjoy your time at the beach!” Teaching is no easy job, and Mrs. Putnam is the best of the best, certainly deserving of a retirement in the sand and sun. Yet another three-year staff member that has been so lucky to experience Mrs. Putnam’s light through most of her high school career is Justine Hooker, who sums it up perfectly: “Mrs. Putnam is everything that you want in a teacher: Loving, caring, and passionate about her students. I have never had a teacher quite like Mrs. Putnam and I will never forget the support and encouragement she showed me these past three years. She is truly a gift to Millbrook High School. I am so honored to be a part of her legacy and to “graduate” with her.” Mrs. Putnam, we could never thank you enough for your lasting influence on us, our writing, and our lives. You made every day brighter at Millbrook High School, and your absence will be felt deeply. This school was made better because of you and it will never be the same again without you. Thank you for thirty-four years of selfless devotion, for all the laughs in between, and most importantly, for being you – the great teacher you are. Happy retirement Mrs. Putnam, we love you!