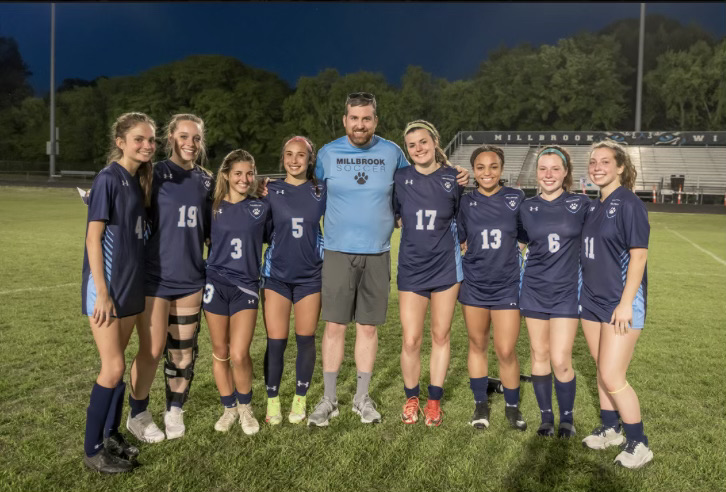 Head Coach Mr. Scanlon stands happily with the seniors on their senior night. The season has gone very well for these ladies, and they hope to end it on a high note.

As the Varsity Women’s Soccer team’s season starts to come to a close, the team celebrates the seniors and their hard work with Senior Night on Wednesday, April 20th at 6pm. As of right now, the Varsity team has a great record of 14-0-1 (14 wins, 0 losses, and 1 tie) and are NAC-VI conference champions with a 9-0-1 record in the conference. They are excited to keep pushing forward to the conference championships next week.

The coaches and players are sad to have to say goodbye to this team and reflect back on their season. Mr. Scanlon, the head coach of the team, says “Senior night was a wonderful opportunity to acknowledge the hard work the seniors did this season and we won which is always better!” He also says every year it is hard to say goodbye to the seniors, but “it is especially hard to say goodbye this year because this group is such a fun group and they make practice that much better.” Senior Kendall Powell, who is a team captain committed to UNC Asheville for soccer, reflects back on her years on the team. She says, “This team has been one of the best things that’s happened to me. I have never experienced such a tight knit group of girls where we support and push each other everyday and every year. We have so many memories and inside jokes that get passed on. We’ve laughed, cried, won, and lost together and I would not change it for anything. I have been so blessed to be a part of this amazing program for the past 4 years and am so happy I got to form amazing relationships with coaches and friends through it. The Millbrook soccer program will be one of my hardest goodbyes.” Senior Nina Wilson, who is the other team captain committed to George Mason for soccer, reflected back on a favorite memory she had with the soccer team: “My favorite memory was riding back on the bus after we beat green hope in the second round of playoffs. We were singing ‘All I Do is Win’  and it was so much fun. It was such a great moment and as a freshman it was nice knowing I had somewhere to go where everyone was welcoming.” Nina also says, “This year especially

has stuck out the most because of the way we all care for the game. Everyone puts 100% into every game and practice. Our team bond is unbreakable and I think that’s why we have had such a great season. I love this team and the past 4 years at Millbrook have been unforgettable.” The seniors on the team have enjoyed themselves and the end of the season for sports can always be bittersweet, but Millbrook is excited to see all they accomplish as they move on to a new chapter.